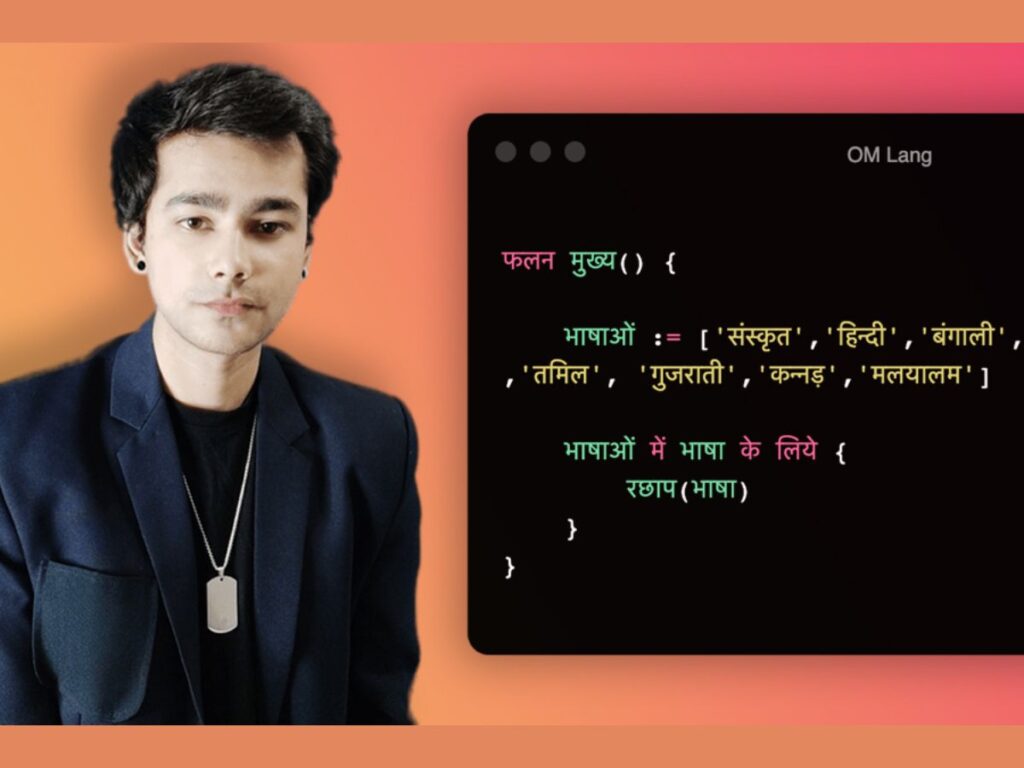 OM Lang – World’s First Sanskrit & Multilingual Programming Language Image Guide:- Person image is the featured image & poster is for in between the article

Mayank Kumar is a self-taught software engineer on a mission to help India rise in technology and innovation through his “OM Lang” project.

OM Lang is unique because it supports programming in 9+ Indian languages, allowing Indians to learn programming in their native language more easily. It is also the world’s first Sanskrit programming language, fulfilling many Indians’ long-held desire for Sanskrit to have a place in the computer world.

Mayank Kumar’s motivation for creating OM Lang was to assist Indians who struggled learning programming due to a lack of fluency in English and to eliminate dependency on English in computers and programming, leading India to be a truly independent nation.

“In my school days, I had noticed a lot of students struggling with programming, especially people from small cities and rural areas. People understand everything better using their mother tongue, including the technical jargon”. The notion of creating a multilingual programming language was to enable Indians to write future software in their native language.

“My main goal is to teach OM Lang in every school, every corner of India. It will no longer matter if an individual understands English because OM Lang removes the dependency on English. OM Lang opens the gate for less privileged people – especially the ones who can’t afford a computer and only have access to their phones to learn and write code easily,” said Mr. Kumar.

Sanskrit plays a vital part in OM Lang Project.” I always wanted to build a Sanskrit programming language knowing that it’s an ancient scientific language with mysterious powers”. Mr. Kumar said that the second main goal of this project is to test the power of Sanskrit in technology and to achieve this by building a team of experts: “I have plans to build something very powerful and unimaginable never heard of before”.

One of the “unimaginable software” Mayank plans to build is the OM Operating System, which, as he envisions, will be able to topple the world’s leading OSes like Google’s Android and Microsoft’s Windows. This is the biggest goal of the OM Lang Project. “I aspire to make India’s future in the film Interstellar a reality”, Mayank said.

Despite being short on funds, Mayank Kumar has given his heart and soul to the development of OM Lang for nearly two years. “This was a relatively new idea, so it was most definitely challenging, and sometimes I just wanted to give up. But I had already gone so far that I had written nearly 100,000 lines of code, I couldn’t give up, and there was something deep inside me that wanted me to finish the project.”

“Now it’s time to take that work even further. The goals are big, and to reach those goals, I need your support”.

Mayank Kumar needs everyone’s support to headstart the project. “I want people to contribute to this project as much as possible, like a gift or a treat to their friend or family. Their support and contribution can help us complete all the goals and create a history.”

Mayank Kumar explains that this isn’t just a project but a mission, a belief he wants to spread across India. “My mission is to bring back India’s lost essence and culture, to use the knowledge we already have with technology and lead India into a bright future, making it a true, independent digital nation. To inspire the coming generations and youth to understand the value of our culture and use it for the benefit of the society.”

Mayank Kumar has also uploaded an amazing video on YouTube explaining to the masses the importance of this project. OM Lang – Sanskrit & Multilingual Programming Language