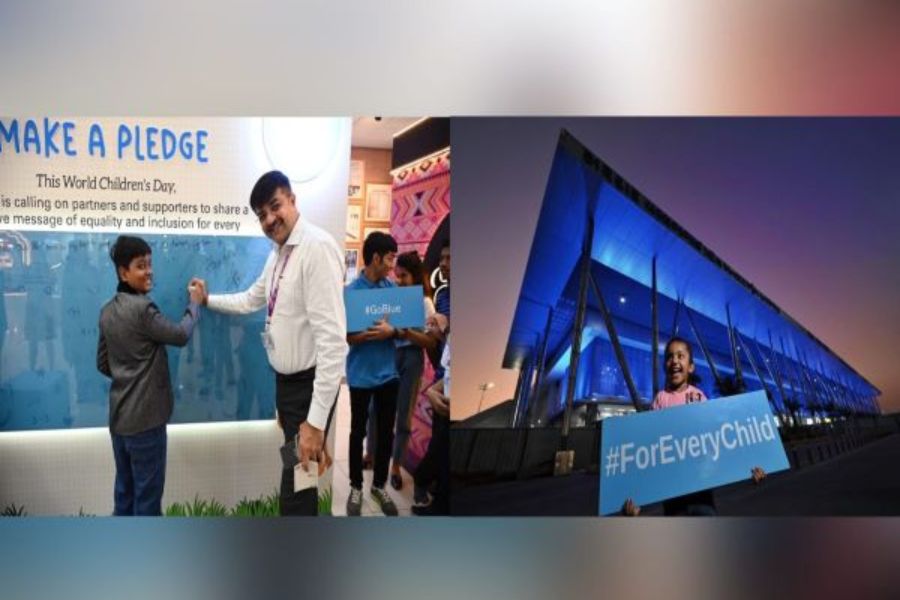 India, November 23, 2022: To give wings to the imaginations of children, on World Children’s Day, November 20, which coincides with the anniversary of the adoption of the UN Convention on the Rights of the Child (UN CRC), a special celebration was done at Ahmedabad airport. The goal of World Children’s Day is to encourage children and young people to advocate for their own rights. This year, global activities highlight every child’s right to be protected against discrimination, regardless of gender, race, religion, disability, or any other status.

UNICEF, the Elixir Foundation, and Ahmedabad Airport came together for World Children’s Day celebrations with several activities during the week. These included: Sarthak Nehete’s symbolic acting as the Chief Airport Officer, A flash mob by the Ahmedabad University students and installations such as a photo booth, a pledge wall, and a postcard campaign were set up at the airport. This campaign allowed children to voice their support for millions of peers who lack education, protection, and other basic children’s rights.

Sarthak Nehete (13), a student at H.B. Kapadia New High School in Ahmedabad, had the honour of chairing a meeting at Ahmedabad Airport, accompanied by Ahmedabad Airport’s Chief Airport Officer. Sarthak discussed how everyone can work together to ensure child rights #ForEveryChild. It was also an opportunity for six young changemakers to share their thoughts, aspirations, and advocacy for the benefit of children at the event. These children are Aarya Chavda (13), Aabhas Senapati (17), Pari Patel (16), Darsh Dudhia (12), Nishtha Shah (15), and Om Mohta (17).

In addition, the installations at the airport around World Children’s Day were jointly inaugurated by Sarthak Nehete and Hitarth Mankodi, Chief Airport Officers, along with UNICEF Gujarat Chief Mr. Prashanta Dash and other stakeholders at SVPI airport.

The Chief of UNICEF Gujarat, Mr. Prashanta Dash, emphasised, “This World Children’s Day, we join together as a global community to acknowledge the progress that has been made for children.” We also commit to doing even more to support the rights of every child. “Our children should be listened to, their ideas should be heard, and they should be encouraged to develop their creativity.” “In addition to playing a crucial role in promoting issues that matter most to them, young people and children can also be powerful advocates.”

While speaking at the event, Ms. Moira Dawa, Communication, Advocacy, and Partnership Specialist, said, “It is no secret that World Children’s Day is a day full of fun, but it also carries a serious message.” It is imperative that children and young people from a variety of backgrounds have the chance to voice their opinions. There is no doubt that we are all on the same team. “In order to create a more inclusive, safe, and sustainable world for every girl and every boy, let’s listen to each other, take action, and resolve to reach out to each other.”

In support of World Children’s Day, 24 young changemakers from Ahmedabad University’s “AU Dance Club” conducted a flash mob performance as part of the airport activation. The purpose of this was to spread awareness of children’s rights as well as the needs of these children. Passengers were awed by the performance since it demonstrated the imperative need to advocate for children and to speak out for them. All of the people present were urged to set aside prejudice and exclusion, to respect and acclaim the unique brilliance of every child, as well as to ensure that all children were raised in an environment that was caring, enabling, and inclusive of them.

Ahmedabad Airport saw thousands of passengers pledge their support for the rights of children. Children were also encouraged to write postcard messages in which they expressed their hopes and dreams for every single child in the state.