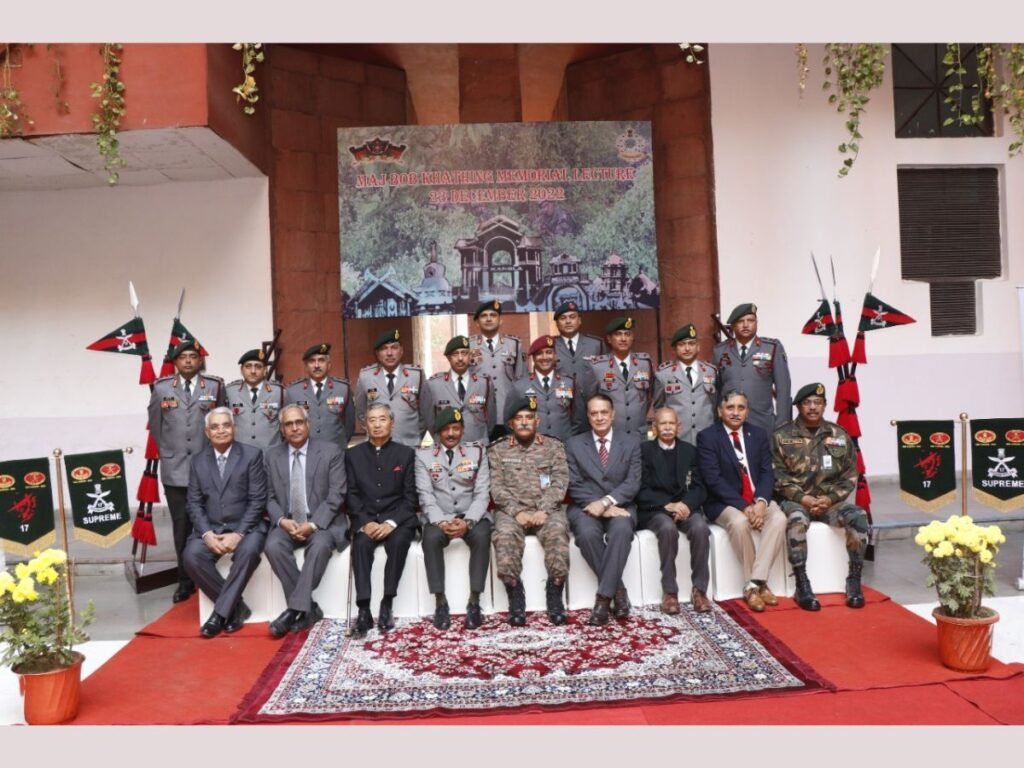 New Delhi (India), December 26: Assam Rifles has a long and chequered history of its presence in the North East Region since 1835. The Force has always been in the forefront on matters pertaining to ensuring peace and development in the North East Region. In order to stay abreast with the dynamic happenings in the region, the Force always has a method of developing strategies to meet any challenges of the future.

To add academic content to happenings in the North East, the Force has established ties with various think tanks; through seminars, panel discussions and guest lectures. Assam Rifles is thus reinvigorating interest in this region by utilizing the reach of various national think tanks. As part of this outreach, it has inked a Memorandum of Understanding with the United Services Institution of India. As part of the MoU, brainstorming seminars and lectures are held annually. In the series of these lectures, the third edition of Assam Rifles-USI guest lecture was held at USI, New Delhi on 23rd December 2022. The Lecture has been named as the ‘Bob Khathing Memorial Lecture’ keeping the monumental role played by Late Major Bob Khathing for the people of North East Region. The Lecture was attended by over a 100 officers and was live streamed to 172 outstations.

Major Bob Khathing was a legendary figure from the North East. During World War II, he served with the famous V Force and for his gallantry, was awarded the Military Cross and Member of the British Empire (MBE). Apart from his committed service in Assam during the great earthquake of 1950, he played key roles in the transitional period in the State of Manipur, Arunachal Pradesh, Nagaland and Sikkim. Major Khathing’s name has special relevance to Arunachal Pradesh; he served as the Assistant Political Officer in erstwhile NEFA. He was also the first Officer to successfully unfurl the Indian Tri-colour at Tawang in the year 1951. Owing to his immense contribution to the North East Region he was awarded the “Padmashree” by the first President of India, Dr. Rajendra Prasad in 1957.

This year’s guest talk was based on the theme “Leveraging North East Region for Enhancing Peace and Stability and Furthering India’s Act East Policy” which also formed part of the Government of India’s initiative in the North East Region to make it a self-sustained global economic hub of India. The talk was delivered by Lt Gen Rana Pratap Kalita, UYSM, AVSM, SM, VSM, General Officer Commanding-in-Chief, and Eastern Command. The General Officer during his talk was very erudite   and highlighted the relevant aspects related to conflict resolution and leveraging economic potential as a key factor to ensure stability in the North East Region. This he said was needed for the furtherance of Govt of India’s Act East policy. The speaker also emphasized on relevance of 4 C’s i.e., Culture, Commerce, Connectivity and Capacity Building as the important pillars of Govt of India’s Act East Policy which are part of the Honourable Prime Minister Narendra Modi’s vision for the region ‘Security and Growth for All (SAGAR)’.

The talk was very well received by the audiences which had eminent personalities from various policy making bodies and think tanks besides officers from the Indian Army, representatives of various CAPFs, representative from the Narcotics Control Bureau and many such important stakeholders of the North East Region.