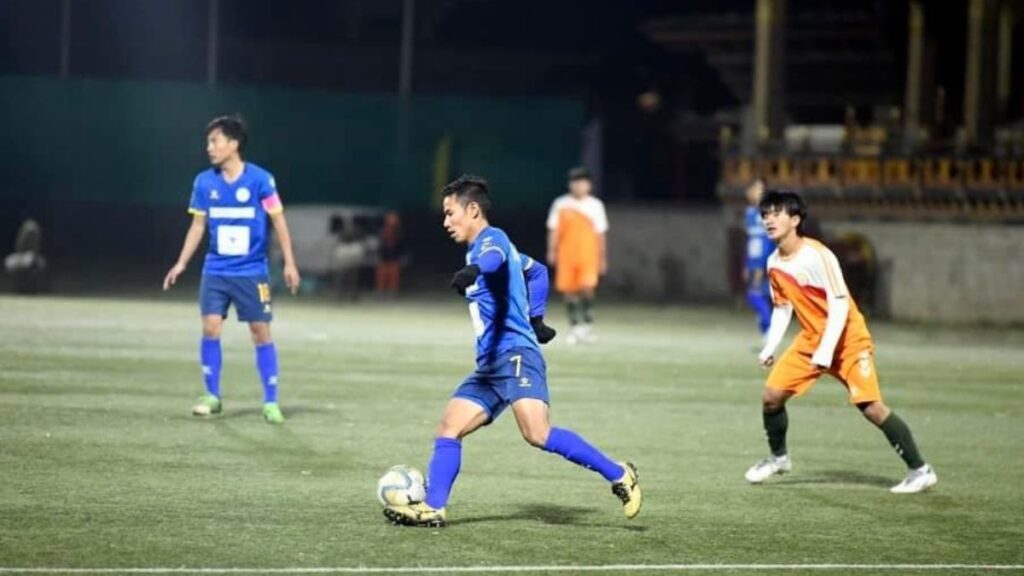 A Footballer from Bhutan contributing his prominent skills in football in Indian FC is none other than Kezang.

New Delhi (India), December 31: Football, a game of standards, makes noise in every nook and corner of the world. West to the east, it has just grown its popularity. And with this era’s players in the football arena, it is just occupying the sport’s fields at a faster rate. Regional teams have elevated standards in the game of football with several talented footballers in India. Each player has his unique contribution to the game on the field, which has brought a certain level of interest to football fans either live or on TV.

Here, we are to interpret with a football player from Bhutan who has his interest converted into skills shown in the game. He is Kezang.

Kezang is one of the zestful football players from Bhutan. However, he is not someone to limit his passion by country boundaries. Rather, for the love of the game, he even plays the sport outside of Bhutan. At 23 years old, he played for Garhwal Heroes FC in the Delhi League in India.

Kezang joined the football club Garhwal FC in March 2022. But he debuted his football career in 2014. His debut international appearance was when he played for Uppa FC of Manipur (India). It was in the 2016 Manipur League. Moreover, 2021 saw him competing in the Arunachal Pradesh League, representing Capital Complex FC.

Earlier in Bhutan, he used to play for Druk United FC, Thimphu FC, Bhutan Clearing FC, etc. But his recent recognition follows in the Garhwal Heroes FC. The club featured in the I-League second division, with Kezang as one of its talented players. The football player continued to contribute to the club’s team, leading the FC to the top of the league table and gaining a 10-pointer.

Although he played most of his football games in his nation, he adds that he got introduced to Indian football to play for Manipur and Arunachal Pradesh. There was a football agent who introduced him to these clubs, and the same supported him in getting entry into Garhwal Heroes FC.

Time in Garhwal FC & his motivation toward the sport

Garhwal Heroes FC is one of the oldest professional clubs in India established in 1953. Kezang says, “At Garhwal FC, its players’ standard of training and hard work inspired me. As a professional club, the facilities are good.” The fifth match with the club faced Delhi FC in November last year. One after another, the team put a collective effort into scoring in every game.

His most recent achievement lies in scoring a hat-trick as Capital Complex FC eased past debutant Kargu Kardi FC 4-1 to earn a full point in the third match of INAL (Indrajit Namchoom Arunachal League). This, too, he scored his first in the 22nd minute, second and third consecutively in the 64th minute. With it, Capital Complex FC easily got through with a 4-1 win against Kardi FC.

When asked about his football guru, Kezang mentions the legendary footballer from Brazil, Ronaldinho. He took him as his only inspiration in his professional career to level up his skills in the game. With a prompt to make a successful career in football, Kezang considers football as his passion and his family as his backbone.

Born on October 7th, this young football player has shown a resemblance to the legendary players in the game. He has even played in the Bhutan Premier League this year. Mainly occupying right midfield, the 24 -year footballer has given his certificate of skilling playing for both football clubs in India and Bhutan.

Few people can maintain their standards and style in the big and stylish game. Kezang has shown his skills in the field, even in left midfield and centre-forward, occupying most of the field’s positions. Today, he is rising as a star slowly and steadily and hopes to shine more in the sport.