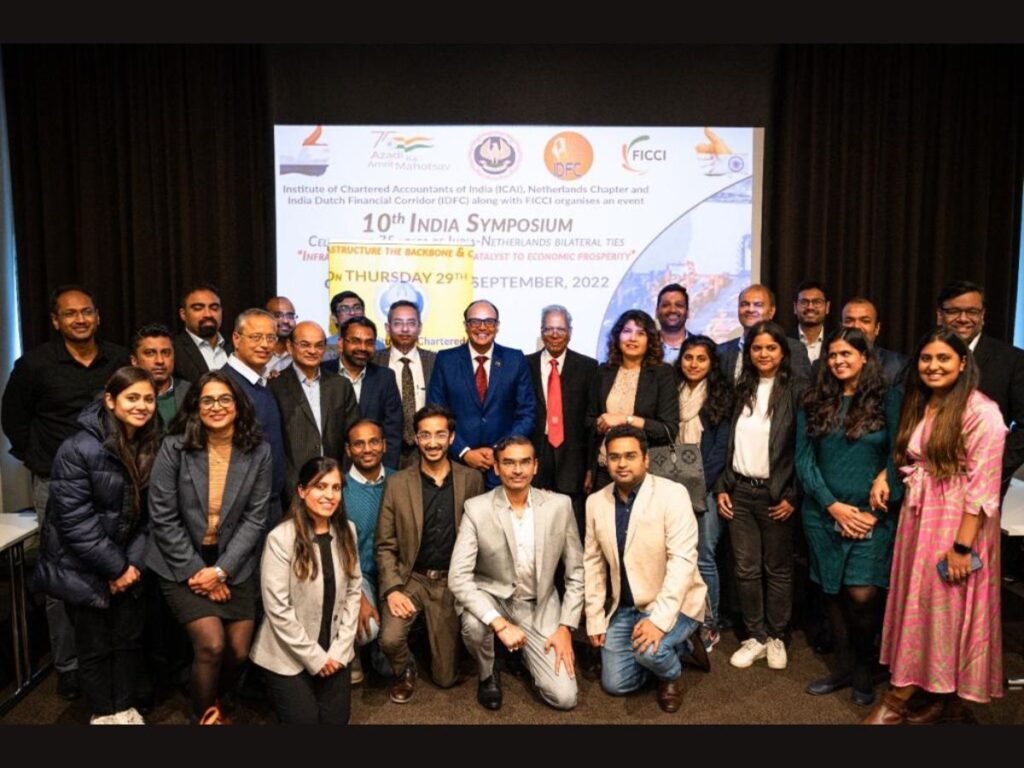 New Delhi (India), January 6: ICAI Netherlands Chapter and India Dutch Financial Corridor (IDFC) celebrated tenth anniversary of India Symposium and organised “India Symposium 2022” (10th Edition) that was held on 29th September 2022 in Amsterdam with room fully packed. This event was attended by around 130 people and was supported by Federation of Indian Chambers of Commerce & Industry (FICCI).

Over the years India Symposium has been conceptualised, designed and curated by Dr. Vikas Chaturvedi, Chairman ICAI Netherlands Chapter & Chairman Indo-Dutch Financial Corridor and CEO, Valuecent Group together with Mrs. Prachee van Brandenburg, Vice Chairman India Dutch Financial Corridor (IDFC) and MD Vriksh2grow Coach & Consult B.V. in 2012. “India Symposium” is the annual Mega Summit that takes place in Europe and showcases Investment opportunities in India. Dr. Chaturvedi has founded and organize this high level Summit every year that has successfully completed 10 years. Today this event has become symbol of Brand India and the opportunities India offers. The year 2022 marks the tenth anniversary of “India Symposium” – as we come to the close of this year we look back at a very successful year. The event was held in September 2022 marked a revival to pre-covid times attendance levels for the main live event.

The special theme of this year’s India Symposium was “Infrastructure the backbone & catalyst to economic prosperity”. Dr. Vikas Chaturvedi said, “India Syposium has played a pivotal role in expanding India-EU business and India-Netherlands business. Various high-profile speakers have spoken at India Symposium in the last decade. India Symposium aims to bring business between India – Netherlands to a 20 billion Euros level as well as India – EU business to 200 billion Euros level in next 2-3 years respectively. India Syposium has completed a decade and has now gotten its own logo to become a brand in its own right that proactively strenghtens the business between Europe and India”. In her Keynote Speech Ambassador of India to the Netherlands H.E. Mrs. Reenat Sandhu gave a comprehensive update on the latest developments between India and The Netherlands. On completion of 10 years of this flagship event, H.E. Mrs. Reenat Sandhu launched the logo of India Symposium.

The third section of the event focused on Infrastructure. Mr. Madhu Sudan, Founder & MD AeroHelicon Pvt. Ltd. showcased the vaste variety of opportunities in his presentation on “Tapping into the Latest Infrastructure Opportunities in India”. Mrs. Joke van Dijk, Director & Owner Van Dijk Water Management B.V. highlighted the progress and recent activities that have been undertaken within the “India-Netherlands Water Cooperation”. To conclude the programme, Mr. Debashish Dasgupta, Vice Chairman ICAI Netherlands Chapter thanked all the participants and speakers on behalf of the organizers. India has taken the charge of the G20 leadership this month hence 2023 promises to be a year to touch new heights to further build on the momentum that India Symposium has generated in the past decade.

With start of G20 leadership of India – 2023 promises to be a year to touch new heights to further build on the momentum of the past decade.